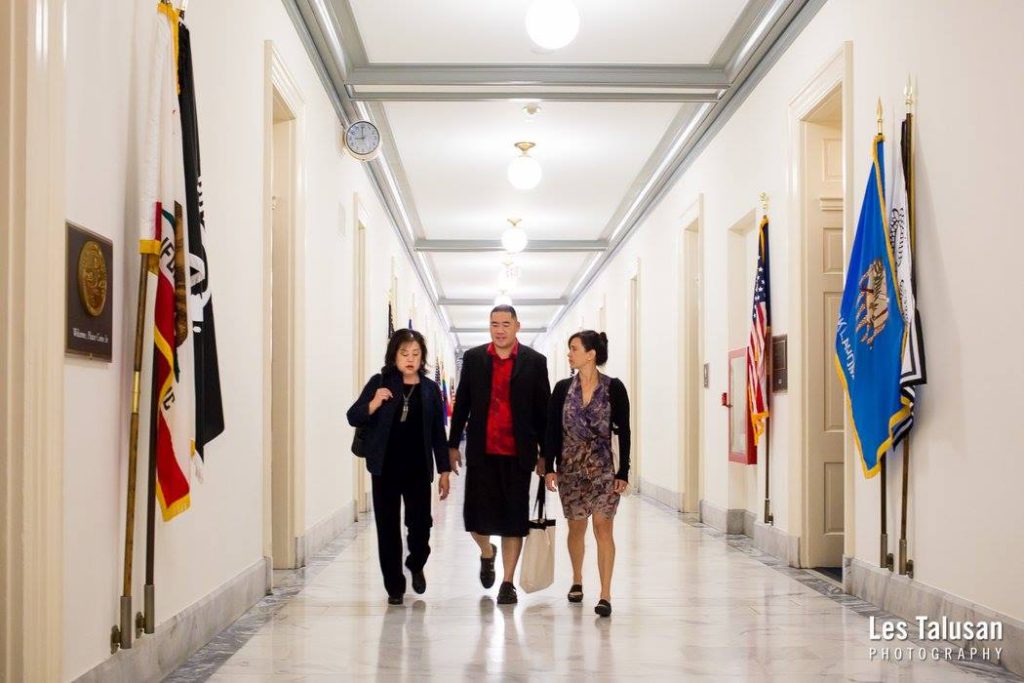 Asian and Pacific Islander American Health Forum – Voices 2017 Conference. I joined fellow Utahan Jake Fitisemanu to talk with our Utah delegation about the need for access to healthcare.

Jani worked with local volunteers to implement a community garden.

Jani has a track record of protecting and preserving Utah’s environment. As a member of the Salt Lake County Council, she sponsored and passed resolutions to prohibit the transportation of foreign waste (supporting congressional efforts with Congress members Jim Matheson and Jason Chaffetz) and depleted uranium across county lines. She has championed open space purchases, opposed the intrusion of SkiLink into Utah’s scenic backcountry and fought to keep a Snowbird mountain coaster off the slopes of Mount Superior. Beyond the headlines, Jani has been an advocate for protecting Utah’s limited and precious water supply and served as a member of Central Utah Water Conservancy District (appointed by former Gov. Jon Huntsman, Jr. and re-appointed by Gov. Gary Herbert) and Salt Lake City Public Utilities Advisory Board (appointed by former Salt Lake City Mayor Ralph Becker). Jani recognizes the critical need to improve air quality and has put those concerns to action in this district.

Jani has continued this advocacy in the state Senate. Serving on the Natural Resources, Agriculture and Environment committee, Commission on Stewardship of Public Lands, and the Legislative Water Development Commission, Jani’s voting record reflects the issues important to this District. According to a former director of SLC Department of Public Utilities, “Jani is a tireless advocate for watershed and water quality protection. Her unique ability to bringing parties with diverse interest together and craft real solutions will enhance Utah’s precious water resources for current and future generations.”

Jani working as a radKIDS instructor. radKIDS is a personal empowerment safety education course for children.

As a mother of two, Jani is passionate about issues that improve the lives of children. During her tenure on the County Council and in the Senate, she has worked to make roadways safer in District 4. She has also fought to improve safety on streets near schools. Because of her safety efforts in the schools, Jani earned the PTA State Involvement Award.

In the Utah State Senate Jani sits on the Education Standing Committee, Public Education Appropriations Subcommittee, as well as the Executive Appropriations Committee (responsible for finalizing the state budget). A former district superintendent says “[O]ur students need legislators who believe in the importance of education and advocate for issues important to students and educators. Senator Iwamoto listens and acts upon concerns.  She is a true advocate for the welfare and benefit of our children.”

This past legislative session Jani successfully obtained funding for the first state pediatric trauma network which according to a pediatric trauma doctor, “…will improve care and outcomes for children who experience a traumatic injury.”

Jani was a radKIDS instructor – radKIDS is a personal empowerment safety education course for children.  She has served on boards of Voices for Utah Children, the University of Utah’s Bennion Center, Discovery Gateway Children’s Museum, and continues to serve on the board for Primary Children’s Hospital.

In the Utah State Senate, Jani served on the Senate and Interim Economic Development and Workforce Services Committee. She received the 2018 “Friend of the Taxpayer” award from the Utah Taxpayers Association. Jani was one of ten senators, and the only democrat to receive a 100% rating. The award is for legislators that “taxpayers can depend on to enact sound tax policies and protect taxpayer dollars,” according to Billy Hesterman, vice president of the Utah Taxpayers Association.  In 2018, Jani again received the “Legislative Business Champions” award from the Salt Lake Chamber of Commerce.

Jani prioritizes public safety through action and meaningful legislation.  Last session, Jani passed legislation to increase penalties for killing K9 police officers who save human lives. Unified K9 Police Officers Dingo and Aldo were killed in Millcreek – they saved Lt. Chad Reyes’ and Sgt. Luis Lovato’s lives multiple times, as well the lives of civilians. Jani also worked collaboratively on solutions and legislation to address shortages in public safety and education through allowing post-retirement reemployment as a tool to bring experienced employees back into the workforce without impacting the retirement system. Jani, serves on the Executive Offices and Criminal Justice Appropriations Subcommittee and was a member of the Unified Fire Authority Board. Jani was recently honored by the AFL-CIO for her work in honoring the sacrifice of the men and women working in fire prevention, fire suppression, and fire investigation. 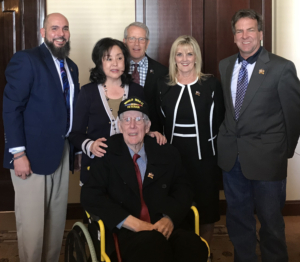 “Jani has proven to be a great friend to seniors.  She was personally involved in the completion of the Millcreek Community Center. She realizes the importance of showing a tangible ‘thank you’ to seniors. Thanks Jani, for your advocacy and support for seniors.”

Jani is proud that during her time on the Salt Lake County Council, where she chaired the Human Services Committee, that Salt Lake County had the second highest number of seniors in the state, while being the most successful county, west of the Mississippi, in keeping seniors in their homes.  Jani served on the board of the Council of Aging.

At the legislature, Jani passed SB 88, Medicaid Housing Coordinator, and funded an appropriation to assist seniors to be able to return to their homes or locate appropriate housing.  Jani founded and chairs the Utah Fall Prevention Alliance.

Jani holds a special place in her heart for veterans, her late father being a WWII and Korean War veteran, as well as a recipient, along other Nisei veterans of the Congressional Gold Medal in 2011.

Jani’s request was funded to provide for veteran college tuition.  She had the privilege of being with the Honor Flight in Washington, D.C. in 2017, and sponsored SCR 6 – Concurrent Resolution Recognizing Utah Honor Flight Program during the 2018 Legislative Session. It was particularly memorable being with Millcreek community treasure Bob Gallagher, and fellow East Mill Creek Lion member, in Washington, D.C. and at the Capitol.

Constituents come first for Jani. She demonstrated that commitment as a Salt Lake County Councilmember, where efforts to engage constituents led to a cover story in The Salt Lake Tribune. Whether the issue involved urban chickens, incorporation or low-level radioactive waste, Jani worked hard to understand her constituents. She continually defined herself as a problem-solver. “Any time we need her,” an Emigration Canyon Community Councilmember told the Tribune, “we call, and she produces.”  Jani has continued her commitment in the Utah State Senate by continuing to respond to every email and phone call and advocating their concerns through policy changes and appropriations. The promise to put constituents first is most certainly her highest priority.  As a preschool teacher in Holladay says, “…she values the input and experience of the people she represents.  She truly has constituents at heart.”

Jani has a proven background in bringing people together.

“She believes strong government and strong communities are dependent upon building coalitions across party lines and diverse groups.  Jani’s effectiveness was apparent as she assembled a coalition of community and government leaders to create a schoolyard garden that serves Holladay and Millcreek school children and refugees.”  —Karen Hale, Former Utah State Senator

Women’s issues and minority interests are critically important to Jani. She strongly opposed efforts to shutter the state’s Office of Ethnic Affairs and co-sponsored Salt Lake County’s non-discrimination ordinances for housing and employment in 2010. Jani passionately supports pay equity, passing legislation to strengthen remedies for pay discrimination for all protected classes.  Jani also obtained funding for an Outreach and Education Coordinator for anti-discrimination. This past legislative session, Jani’s appropriation request for Naturalization Initiative for New Americans was funded to continue and expand an initiative that helps legal residents who are eligible to be naturalized become new American citizens, fulfilling their dreams and maximizing their contribution to our economy and society. She believes diversity of people and thought bring unique perspectives to the public policy table.

Jani was a founding member of the Asian Pacific American Women’s Leadership Institute. Jani has served on the executive board of the Asian Association of Utah (Refugee and Immigrant Center) and is vice president of the Japanese Community Preservation Committee (JCPC) to preserve what is left of what was once Japantown. In 2017, Jani received The Foreign Minister’s (of Japan) Commendation, conferred by the Consul General of Japan in Denver Hiroto Hirakoba for strengthening ties between the US and Japan.

Jani with students and instructors from the Utah School for the Deaf, and Skyline High School (ASL). A joint resolution was passed in the 2018 session honoring the efforts of Deaf and American Sign Language instructors. Sen. Iwamoto sponsored this with House Rep. Jim Dunnigan.